yep i finished another one, well sort of i still need to cover the edges but haven't decided how yet, so as i usually do when something is bugging me i will stare at it until my brain has decided on a plan.  This project started as a way to use up the Graphic 45 film cannisters i had left from store inventory i had the idea but... i did start this project twice before i was happy with the direction i was going. 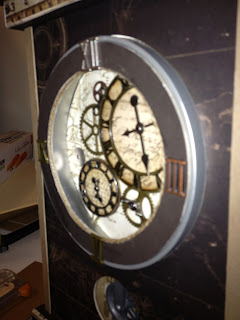 i used the film cannister to create depth in the clock face by cutting the lid to reveal the inside, then inlaying the cannister in the clock frame that i build out of chipboard.  Prima Engraver collection and all their new metal embellishments worked perfect for this project. 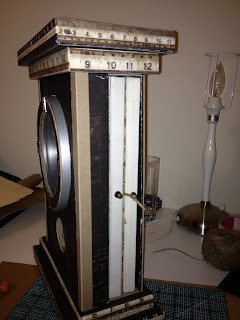 one side of clock frame only has a half wall, then i created mini albums to side into the empth space. I binded the mini albums with white hockey tape because that was what i had on hand but i should have used black hockey tape. 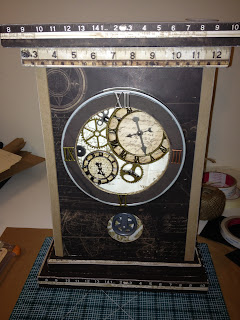 front view, also had a few packs of Tim Holtz pulleys left from store inventory, so use it for the pendulum, just what it needed for finished look 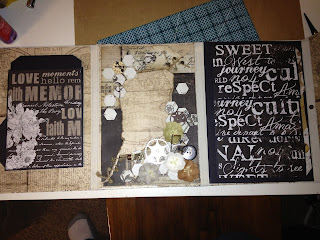 inside mini- opens to reveal three pages, two with photo flips with tag insert then in the center a layout you just need to add a picture to.  there are two minis both the same idea but with a different center layout and photo flips

this one will be a kit as well but only 6 since i was just using remaining store inventory.  again i am waiting on paper, i will post once available and how to order.
Posted by Boozybear at 09:54 4 comments:

here is the finished product, i used Kaiser Craft 75 cents paper line which is nearly impossible to get right at the moment, hopefully i will have soon and the kit will be available in May.  You can order the kit from my email (check contact infomation) or purchase a Treasured memories in Edmonton, Alberta 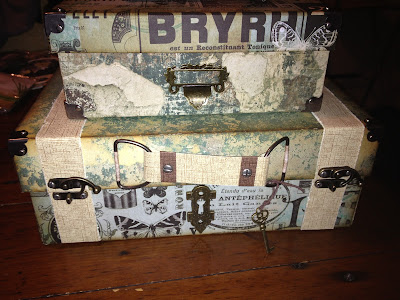 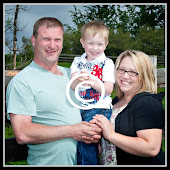